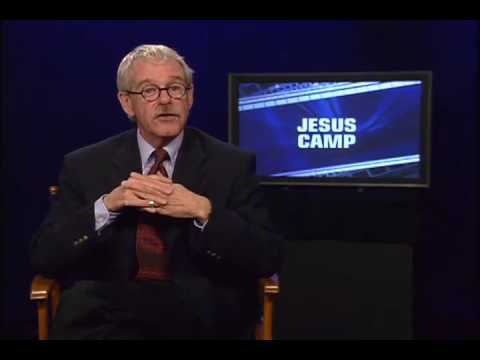 Jesus Camp - Movie Reaction - WHAT THE HELL DID I JUST WATCH???

So, as someone increasingly frustrated at being represented by a government whose playbook seems to be borrowed from the Holy Crusades, when I saw the trailer for Jesus Camp, I was equally fascinated and horrified. Seeing children espousing views that they are far too young to truly understand brings to mind some of the darker parts of humanity, the ones that rob kids of their innocence and force them to grow up too quick and without their own sense of themselves something you see glimpses of in the film when the adults aren't watching. Sure, some will say that's insulting these kids' intelligence, but that's up to you to decide. Seeing how the parents here shape their children into clones of themselves through homeschooling and censorship, they probably don't have an intelligence of their own to insult.

The funny thing is, none of what is said above is in the film. At least, it's not there if you don't want to see it with the exception of Air America host Mike Papantonio's presence as a commentator. Instead, directors Rachel Grady and Heidi Ewing turn on their cameras and watch as Becky Fischer teaches her young charges at the "Kids on Fire" camp to become the next generation of evangelicals, a countering force to the fanatical martyrs-in-training they see as their opponents in the battle for control of the planet's souls. You say po-ta-to, I say po-tah-to, you say religious education, I say twisted brainwashing, which comes through loud and clear in the adults' casual throw-away comments and more boastful statements.

The stars of the show are a trio of ragamuffins who would rather go to church than to Disneyland, Levi, Rachel and Tory. Most parents would kill to have kids so well behaved, self-assured and positive. But ask most people, and they seem a bit creepy, with their judgemental views and forceful opinions, especially Rachel's, while Levi, with his trailer park haircut and preechy tone, and Tory, who's far too close to eligibility to have such strong opinions about abortion, are the kinds of kids that need to be home-schooled to prevent them from the daily schoolyard abuse their personalities would rightly welcome.

Anyone looking for a perfect villain might find one in disgraced preacher Ted Haggard, who was busted for his gay meth affair shortly after being filmed for this movie. Between his hypocritical stance as a closeted hate monger and his rather brutal handling of Levi's adoration, he's the face of evil that Fischer doesn't fully provide, despite some of her lines, including many unfortunate references to war, being so over-the-top that they feel like they should be in a parody, not a documentary.

Now that you've gotten through the bile I've spewed regarding the crazy christians so I'll tell you this: Jesus Camp will appeal to Godless liberals and redneck conservatives alike. It's simply a terrific story told with true filmmaking skill. The only people who might not like it would be those who view the adults actions as child abuse an easy leap to make and evangelicals with a twinge of doubt, as it could hold up a rather uncomfortable mirror.

Plus, as a bonus, there's a ton of MST3K moments to have fun with. The DVD Packaged in a standard keepcase, this one-disc release has an animated, full-frame main menu, with choices to watch the film, select scenes, adjust subtitles and check out the special features. Your Daily Blend of Entertainment News. Contact me with news and offers from other Future brands. Receive email from us on behalf of our trusted partners or sponsors. Thank you for signing up to CinemaBlend. You will receive a verification email shortly. There was a problem. Even before they reach the camp, the film's kids live in an environment designed to keep anything that might challenge their faith at several arms' lengths. At camp, it only gets more intense.

Kids On Fire director Betty Fischer never appears less than earnest. She's no charlatan and clearly believes that her flame-drenched, scare-tactic PowerPoint presentations will set her kids on the right path. But for anyone who values free thought and open discussion, there's a serious creep factor to the way she speaks almost admiringly of the training camps of "the enemy" which seems to be all Muslims and the way she encourages near-idol worship of a cardboard George W.