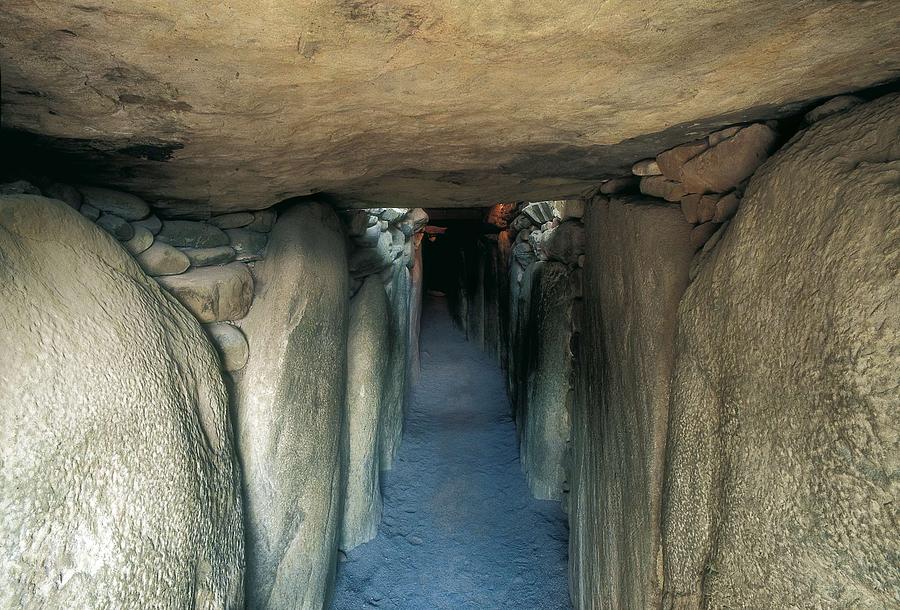 This tumulus was composed of earth and stone and has a diameter of 8. It dates from the Early Bronze Age; more specifically, the early centuries of the 2 nd millennium BC. Close by there are some bas-reliefs in the rock depicting the Tree of Life. Dolmens or Megalithic Tombs Dolmens are collective tombs made out of large rocks covered by a tumulus and designed to be used for several burials. In the image above, right hand side of the cairn, you can see some of the large kerbstones that were used in the inner kerbing.

Cairn K. Cairn K was also constructed with the classic cruciform shaped chamber and has an intact dry-stone corbelled roof. At the back of the right hand side chamber is an angled stone known as St Patrick's Stone. It is the same shape as Croagh Patrick mountain which can be easily viewed from Carrowkeel on a clear day. The 7 metre-long passage is orientated to Queen Maeve's Cairn on the top of Knocknarea. This orientation was also noted at Cairn E on the top of Carn Mor. There is a large roofless cist lying to the southeast of this cairn, see image below right. The complex was built around B. The strange glacial erratic, known as the rocking stone, can be seen east of cairns G and H in the direction of Lough Arrow.

An unexcavated cairn to the west of cairn K is cairn L, see image below left. For a comprehensive guide to the Carrowkeel cairns visit Martin Byrne's excellent site Carrowkeel. Martin is also a tour guide and can be contacted at the above site. The image above shows the site of the earliest known neolithic village in Ireland. It is situated in Mullaghfarna on a limestone plateau on the northern slopes of the Doonaveeragh ridge. The remains of at least circular stone foundations can be found at the site of the prehistoric village.

These huts may have been inhabited by the people who built the cairns. You will have to walk east from the cairns towards Lough Arrow to view the village site. Cairn O can also be seen perched on the top of Doonaveeragh. Originally part of a megalithic tomb , their recent history has involved a number of moves, since they were first arranged in a stone circle by Joseph Need Walker, the then-Calderstones estate owner, in Stones rolled in to start new park life.

Figure A pillar of a prehistoric megalithic tomb or dolmen on a small island in the uppermost Sungai Kayan opposite the mouth of a small tributary known as Sungai Sui, situated between the longhouse villages of Lidung Payau and Long Sungai Barang, Apo Kayan the latter is the last upriver village on the Sungai Kayan. The mystery of the twin masks on megaliths at Long Pulung in East Kalimantan: prehistoric wax modeling molds for casting bronze moko drums? An interpretative attempt. This megalithic tomb was constructed thousands of years before Merlin and King Arthur lived, if they ever lived. Less than an hour's drive from Dublin is the Megalithic tomb of Newgrange, which was built in around 3,BC.